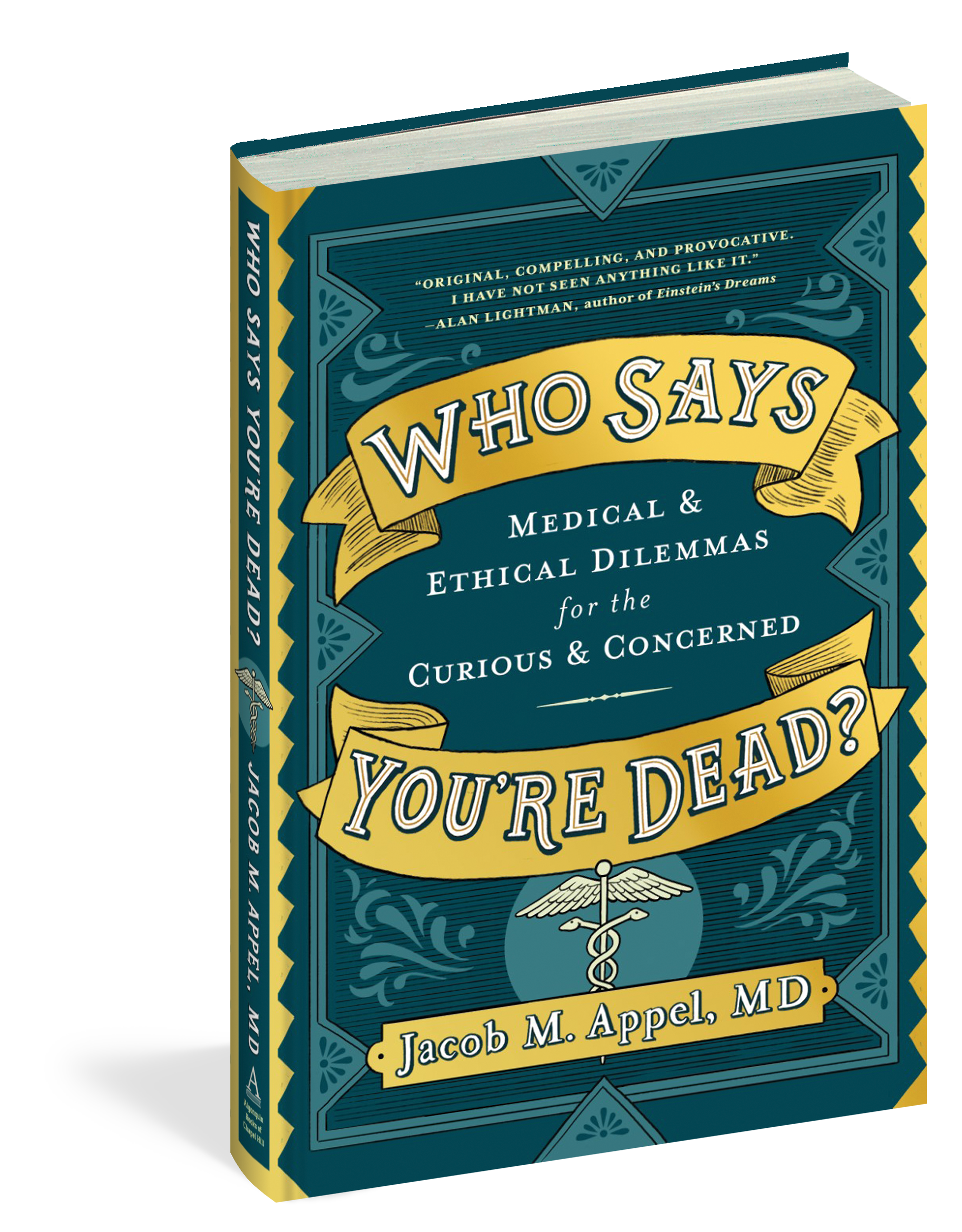 Before I started reading this book, I thought of myself as a moral person. Compassionate, I would say. I’d thought about where I stood on stem cell research, genetic testing, the destruction of fertilized embryos, assisted suicide, and end-of-life directives. I understood HIPPA and read through the yards of paperwork my medical provider required me to sign in order to have online access to the health records of my kids. But there are so, so many places where modern medicine offers questions or choices that I had never considered, and Who Says You’re Dead? Medical & Ethical Dilemmas for the Curious & Concerned covers a whole range of them. I came away feeling like the ethical foundation of my life had been tested, and I’ve got food for thought for a long time to come.

Jacob M. Appel, a medical doctor, practicing psychiatrist, and bioethics professor–who also holds a law degree from Harvard and is the author of several prize-winning novels and short story collections–offers in pithy outline a number of possible problems that consumers of contemporary health care might confront. In a page, he sketches a scenario that you likely never thought of, unless you are attached to the health care field, had it happen to you or someone you know, or spend your time combing the news for bizarre medical stories. Not only are these scenarios possible, if rare, but the names Appel chooses for his characters are highly amusing if you know the literary source. (You’ll encounter Drs. Doolittle, Strange, Zhivago, Van Helsing, and Nurse Ratched even makes an appearance.)

But what follows is not a guy with five degrees, who’s much smarter than you are, telling you what to do. Nor does Appel serve up medical guidance or advice. Instead, he offers the reader, as he would his bioethics students, ways of thinking about the problem. He lays out the choices and their probable consequences. He draws on historical cases, medical research, and legal precedent to suggest likely outcomes. He looks at legislation, standards in the field, protocols of industry organizations or medical associations, and practices in other countries. He also touches on social customs, cultural practices, and religious beliefs that might provide opposing or conflicting viewpoints on a specific scenario.

He’ll tell you what is standard medical practice, but he doesn’t tell you what’s right. You have to decide that for yourself.

The book is a wonderful thought experiment, test of humanity, and framework for probing your own ethical structure. Who’s more important, the individual or the collective? The visible sufferer or the invisible patients? What are the boundaries between privacy and public health? How far should patient autonomy be honored, and what about when it conflicts with the health and safety of others? When a patient does not possess the legal capacity to make decisions governing their own health, who gets that authority?

Appel doesn’t venture into every possible territory, but he cuts a wide swath, organizing the questions around six different areas of concern, from patient confidentiality and fertility and conception issues to public health and end-of-life issues. The structure leads you, the reader, to think deeply about your stance not just toward the scenario sketched out but the larger questions emerging side-by-side about bodily integrity, autonomy, and our moral obligations to others, including the vulnerable and the collective human society beyond our own family or tribe.

The results are eye-opening. In thinking through some of these questions, I found I’m not as libertarian as I thought in some respects, and not as compassionate as I believed myself to be in others. I am in fact, all around, more ruthlessly utilitarian than I knew.

Some of the questions I found I could answer easily. Should the wealthy be able to advertise and pay for private organ donors instead of waiting in line? (Yes. This is America. That’s how capitalism works.) Should a suspected criminal be subjected to surgery against his will if the bullet in his leg can prove him the murderer of an innocent person? (Yes, as the surgery poses minimal risk to the injured and the crime is homicide.) Can the police do a DNA dragnet to find the perpetrator or rape and assault? (Yes, if the DNA samples are guarded or destroyed and used for no other purpose than to find a match with DNA at the crime scene.) Apparently I don’t have much sympathy for criminals, rigidly authoritarian person that I am. Or people who choose to be an undue burden on public resources.

But some of the questions really stumped me. If a woman is gestating as surrogate and the parents who hired her died, who should get to keep the baby–the gestational carrier or the family of the people paying her? Should death row inmates be allowed to be on the list for organ transplants? What to do if one conjoined twin wants to be separated and the other does not?

How should scarce medical resources, like ventilators, be distributed in a crisis? Should pharmaceutical companies charging an astronomical price for a proprietary life-saving drug be able to prevent other countries from reverse engineering a cheaper substitute? Should doctors be allowed to do drug trials on vulnerable populations if the results could have a vast impact on human health and welfare? Should national leaders who perpetuate human rights abuses be given medical assistance in democratic countries?

What should a doctor do if a genetic screening of a patient turns up false paternity? What should a patient do if her results could have a devastating impact on her family, her business, or her employability? What are the responsibilities of the individual to the collective? What are the limits of “natural” or “human” or “capable”? What does it mean to have quality of life?

For someone who likes to follow instructions (cf. rigid authoritarianism, above), I sometimes longed for Appel to come down on one side or another and tell me what would be considered ethical, or moral, or “right.” (I want to know the right answer, please.) It was uncomfortable to discover how loosely formed and un-thought-through my own ethical and moral framework is, particularly since I am a teacher, leader or particpant in community organizations, and caretaker for two minors whose ethical and moral framework it is my responsibility to help form.

But at the same time, I think the purpose and execution of the book is brilliant. The billing for the “curious and concerned” is a misnomer. Just as I feel all students should be required to take a civics class and a philosophy class at some point in their compulsory education, I now feel that a bioethics class would be an illuminating exercise. (I took Business Ethics in college, which was not the same thing.) While not telling us what to value, or what to think, Appel’s book challenges the reader not only to philosophize but also to examine, test, consider, and in some cases re-evaluate one’s morals. We like to bill literature as providing an exercise in humanity. This book does that, in spades.

The Spa, by Fay Weldon

One thought on “Who Says You’re Dead? by Jacob M. Appel”