Editor’s Note: This post, our newest The Feminists are Teaching feature, is the first in a series of three to showcase work done by junior scholars in the Integrative Humanities class taught by Dr. Meriem Pages at Keene State College, Introduction to Thinking and Writing 101: Medieval Women Writers.

In the spring of the academic year 2014-2015, I was given the chance to offer a year-long freshman course at Keene State College in Keene, New Hampshire. In the fall semester, the course would be dedicated to developing students’ critical and analytical skills; the same group of students would then focus on applying those skills to their writing in the spring.

As a medievalist, I chose to introduce the fifteen students enrolled in IHENG 195 (the IH prefix designates the course as fulfilling the “Integrative Humanities” requirement for Keene State College’s general education program) to the interdisciplinary field of Medieval Studies in the fall semester, but I wanted to wait to pick a topic for the writing course. I hoped that, as the fall semester unfolded, I would get a better understanding of what kinds of texts inspired the students so that their interests might shape the content of the course in the second semester.

It soon became clear that many of them privileged narratives dealing with the representation and treatment of women in medieval literature. To respond to this interest, I chose to look specifically at medieval women writers in Introduction to Thinking and Writing 101 (the name given to Keene State College’s composition course). We started with Perpetua’s Passion of Saints Perpetua and Felicitas before jumping head-first into the Middle Ages with the writings of Hrotsvitha of Gandersheim, Héloïse, and Christine de Pizan. We concluded our study of medieval women writers by turning to late medieval England with Julian of Norwich, Margery Kempe, and some excerpts from Margaret Paston’s letters.

However, the topic of the course and our focus on writing are not the only two aspects of ITW 101: Medieval Women Writers worth mentioning. Two important factors especially guided us: first, due to an administrative oversight, only five students made the transition from the first to the second semester. As a result, the course became a very small seminar in which the students and I could engage in the kind of intellectual work usually reserved for more advanced classes.

The second factor that determined the outcome of the course was also in many ways accidental. At the end of February 2016, I attended the Illinois Medieval Association annual conference, where I met Dr. Misty Urban and heard her deliver a highly thoughtful presentation on one of Showtime’s most recent examples of television medievalism, The White Queen. In her essay, Dr. Urban examined the complex—and somewhat tortured—intersection of feminism with medievalism in contemporary society. When asked how to discuss feminism with undergraduate students, Dr. Urban suggested that, rather than lecture our students on the “correct” meaning of feminism, we should engage in a real, open conversation about alternate interpretations and definitions of the term.

Armed with this invigorating new thought, I returned to my classroom with an idea for a paper topic: define feminism, then identify which of the women writers discussed over the course of the semester best embodies your definition of this term. In response to my prompt, each of the five students composed a very personal essay. Three students especially, Robin Chaney, Melissa Depew, and Ellen Lockwood, described feminism in diverse, yet thought-provoking ways. I would like to end by stating how proud I am to introduce these three essays, but to do so would imply that I had a hand in fashioning these brief, but powerful pieces, ones for which Ellen, Mel, and Robin should be able to take full—and richly-deserved—credit.

Feminism is a term for which there exists many different definitions. It is a concept that has changed significantly over time, as has, coincidentally, the role of women throughout history. When considering medieval women writers such as Perpetua, Hrotsvitha of Gandersheim, Heloïse, Christine de Pizan, Julian of Norwich, and Margery Kempe, Christine de Pizan comes closest to embodying our contemporary ideals of feminism. In fact, two women stand out as definite advocates for feminism: Emma Watson and Christine de Pizan. 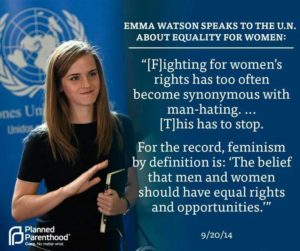 Today, an outspoken spokesperson for feminism is the renowned Emma Watson. She played a very strong role as Hermione Granger, stood up for herself, and was regarded as one of the smartest characters in the Harry Potter franchise. Her natural personality as a clever, independent woman carries through to her performances. 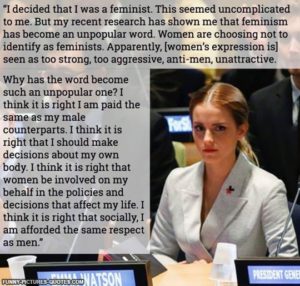 After much consideration, my definition of feminism is much the same as that of Ms. Watson: men and women should have uniform opportunities and equal rights, and by no means should one gender be cut off or held back from anything to which the other gender has full access. This applies not only to societal situations, but includes political and economic circumstances. It should be noted that though thousands advocate this standing, there remain those (a surprisingly large number) who still believe women should be, and are, inferior to men.

Christine de Pizan is a strongly opinionated advocate for feminism. She continually gives examples of how much better the world would be if only men and women were equal. If men listened to their wives, and treated them as partners instead of low-level possessions, they would see that women are quite intelligent. However, it is important to remember that Christine never puts forth the argument that women should be allowed to hold positions, or express opinions, on either political or economic issues. While she does not specifically advocate for the inclusion of women in the public sphere, she most certainly supports the equal treatment of men and women in a very general, every day sense. Christine de Pizan is the medieval version of today’s Emma “Feminist” Watson.

There are a few cases in which feminism is emphasized in The Book of the City of Ladies. The first is that of Xanthippe and Socrates. They both love each other, and treat each other as partners. They are equals: He is a widely respected philosopher, and she is an incredibly clever, intelligent woman. Another example of an equal relationship can be found in the story of Lady Curia and her husband, Lucretius. They respect each other, and each one heeds the other’s advice. As a result, Curia saves Lucretius’s life. Not only does Christine support and advocate feminism, she also puts women in the spotlight as very intelligent, wise beings.

The fair and equal treatment of women was definitely an issue in the Middle Ages, but it was not addressed directly because questioning the role of men and women, especially for a woman, would have been too dangerous. Christine de Pizan took the only road she could: she expressed her feminist opinion of how gender roles needed to be equal, but was subtle in conveying her message instead of blatantly stating that the society she lived in was not equally fair to both genders. She is quite opinionated in what she believes the role of women should be in society and everyday life; however, she states her opinions through her stories, giving plenty of examples of the positive impact of fair treatment of women and the problems created by imbalance between men and women. Christine de Pizan is a timeless feminist, whose viewpoints on gender equality and gender roles are at last beginning to be seen and heard; her opinions are shared by feminists such as Emma Watson and many others.

Christine makes it quite clear that she does not regard women as weak beings. The female gender can, and often does, make better decisions than men. As stated in My Big Fat Greek Wedding, “The man is the head of the house, but the woman is the neck, and she can turn the head whichever way she wants.” Men like to believe that they are in charge, that they are always correct; women allow them to believe this, but if they actually work together, they will both find that life is much easier to live.

Ellen Lockwood will begin her sophomore year at Keene State College in the fall of 2016. She greatly enjoyed writing this piece and hopes that others enjoy reading it. 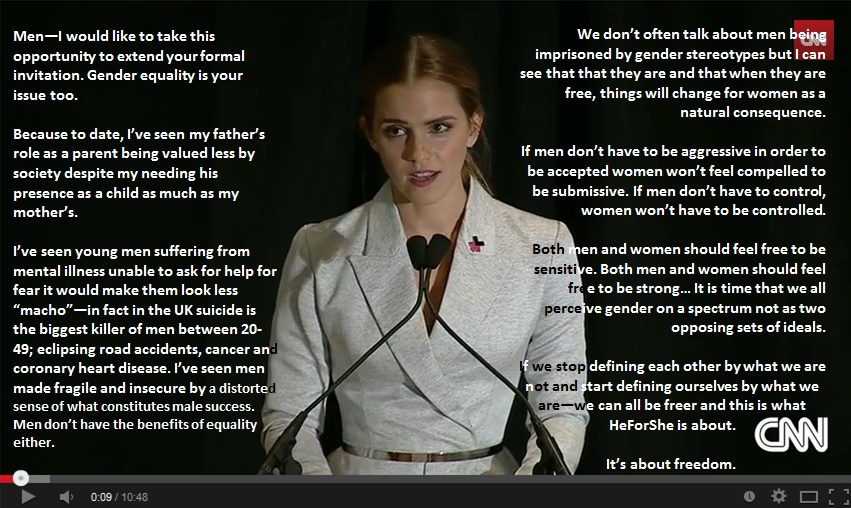 Surrendering to Motherhood: Losing your Mind, Finding your Soul, by Iris Krasnow