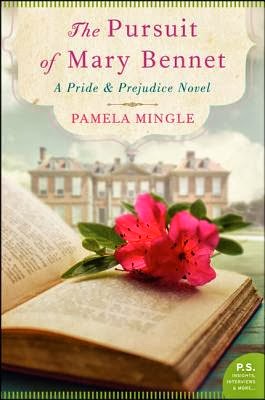 NB: This book comes out from William Morrow in December.

Mary is, in many ways, the least appealing of the Bennet sisters. She lacks Lizzy’s wit, Jane’s gentleness, Lydia’s insouciance, or Kitty’s harmless silliness. She certainly lacks Mr. Bennet’s wry insight, and when she makes her presence felt, her audience–and the reader–usually winces at her prosy sermons or her torturing of the piano. Austen told her curious family that Mary eventually married one of her uncle’s clerks (so says Anna Elliott in the Author’s Note to Georgiana Darcy’s Diary) but who knows what she imagined that future to be. Pamela Mingle (Kissing Shakespeare) gives Mary a book that reveals a sweet and tender-hearted interior life, but doesn’t stray far from the formula that makes P&P so beloved to fans of Austen and Regency romance alike.

Three years after the end of the original novel, Mary has undergone her own humbling and become self-conscious about her flaws; piano lessons, a self-directed course in literary studies overseen by her father, and visits to the happily-married Jane and Lizzy have been very improving. But Mary is tired of the expectation that she shall be the spinster sister, the one who takes care of everyone else. Even more than she resents being expected to attend Lydia during her confinement, she resents Kitty’s impending engagement to Henry Walsh, a gentleman friend of Bingley’s. Once upon a drawing room, Mary caught Mr. Walsh gazing fixedly at her, and she’s felt unsettled about him ever since.

Of the ever-swelling tide of Austen sequels and spin-offs–and I think there are entire subsections in the bookstores by now–this opens as one of the most Austen-like. Jane famously worked her little bit of ivory, two inches square; Mingle, more domestic and less artistic, seems to have an embroidery hoop, not much larger, in which each stitch is delicate and precise. The effect is charming and pleasant, with nothing to mar the pattern. Her Mary is introspective and sensitive, and Mingle draws out the poignancy of her longings without making her tedious or depressing. She doesn’t have Austen’s power to reveal an entire personality, a history, or a compelling social critique in a single line, but then, few novelists do; it’s the reason Austen has become so firmly entrenched in the canon of classics. Mingle’s loves as a librarian and teacher sneak through, however, in Mary’s reading list; there are shouts out to Southey, Shakespeare (naturally), Milton (Mary, like the Romantic poets, much admires Paradise Lost), and, curiously enough, Samuel Richardson’s Clarissa. Henry Walsh gives her his copy of this tale of a feckless man who drives his lady love to ruin and then death; at the very least, one would think the virtuous Pamela or the moralizing Sir Charles Grandison more suitable reading material to loan to a virginal female one admires. Real Austen experts will note that the timing of Mingle’s universe doesn’t work; P&P is probably set in the last decade of the 1700s, when Jane started writing its precursor, First Impressions; Southey’s biography of Nelson appeared in 1813, the same year that P&P was finally published. None of this, of course, takes away a bit from Mingle’s book; her purpose, as with most continuations, is not just to allow readers to roam around the landscape with the characters they love, but to try, essentially, to tell the original story again, slightly disguised.

In so doing Mingle also doesn’t attempt the broader, near-omniscient third-person narrator that makes Austen so capable of simultaneous compassion and cutting exposure of her characters’ foibles. Like most continuators, she sticks with the more sentimental and narrower first-person point-of-view. The result is that the reader doesn’t see much more depth in the surrounding characters than Mary does. As is so often the case with sequels, spin-offs, and other types of fan fiction, the figures we know and love from P&P dwindle more or less to stereotypes of themselves. Mrs. Bennet is a bundle of nerves; Mr. Bennet hides in his library; Bingley and Darcy are brave and strong; Jane and Lizzy are brave and motherly; Lydia is spiteful and self-centered, and Wickham, who at least is an appealing rogue in P&P–even Lizzy is almost taken in–is more of a cad than ever.

Otherwise Austenian in its characters, tensions, conflicts, and the main trajectory of the plot, Mingle makes an abrupt departure from the world of Austen about midway through the book, in her introduction of two new characters: one is Henry Walsh’s secret, and the other is Lydia’s possibly illegitimate offspring. With these two youngsters (I cannot recall seeing any infants in Austen, anywhere) Mingle makes the project fully her own, and the stamp is a decidedly maternal one. Arousing Mary’s mothering instincts makes her a relatable character, certainly, but the problem with small infants in fiction is that it is very hard to render them as full and engaging characters. Understanding for Mary’s attachment to her tiny niece Felicity relies on the reader’s disposition toward babies to make her sympathetic, since, like real-life infants, Felicity is more interesting to her chief caretaker than to anyone else.

It’s not fair to blame continuators for not being Austen (see review of Lydia Bennet’s story, below), but it does strike a wrong note, in an Austen-like world, to hear characters refer to “liking” one another, insist that esteem and admiration of good qualities is something separate from and inferior to romantic love, or passionately espouse very modern notions of child-rearing, attachment parenting, and paternal involvement. If the reader can skim pass this dissonance, the resolution of Mary’s story will delight and satisfy; if the dissonance jars, one might feel that a book which starts out being around four stars in quality and interest diminishes in the last third to three-star quality, if not two. The best that can be said about the ending is that it doesn’t go on too long.

Of course a sequel won’t give us back Austen, and each author has her own story to tell. What’s disappointing, if anything, is the nature of sequels themselves: that essential genius, that original and surprising spark can be copied, can be imitated, but can never leap to life again in precisely the same way, not even when the same author returns to the work. The reader’s expectations have already been constructed, and Austen sequels, now, can only be formulaic. (I say this without having read or seen Austenland, though I do admit Jo Baker’s Longbourn has floated up on my to-read list; she might truly be doing something new.) Still, if we readers can be content with the Bennet sisters being shadows once removed of themselves, and of Austen’s world being twice removed first by distance and second by imitation, Mingle’s book is more pleasing than most of its kind and, like the embroidery samplers manufactured by genteel nineteenth century ladies, one can admire the capable execution and quiet, sweet, quite unobjectionable effect.

The Witch’s Market by Mingmei Yip

The Secret Life of Mrs. London by Rebecca Rosenberg