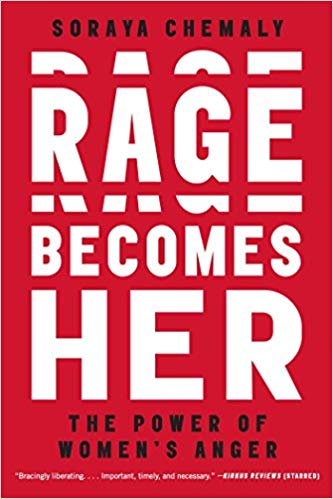 Looking for some great reading material for fall? Femmeliterate presents for your consideration:

Not That Bad: Dispatches From Rape Culture, edited by Roxane Gay

This is a book for the #MeToo and #TimesUp era, an era in which the scales are slowly tipping against rape culture. There’s still a long way to go, but attitudes, behaviors, and language around topics of sexual violence are changing. It’s difficult to read a collection like this and not despair—at the state of our culture, at the horrors that people willfully enact on one another. But everyone should read it, because admitting there’s a problem is always the first step toward recovery. —Matt Grant of Brooklyn Rail

Rage Becomes Her: The Power of Women’s Anger, by Soraya Chemaly

Contrary to the rhetoric of popular “self-help” and an entire lifetime of being told otherwise, our rage is one of the most important resources we have, our sharpest tool against both personal and political oppression. We’ve been told for so long to bottle up our anger, letting it corrode our bodies and minds in ways we don’t even realize. Yet our anger is a vital instrument, our radar for injustice and a catalyst for change. —mcnallyrobinson.com

Amateur: A True Story About What Makes a Man, by Thomas Page McBee

In this groundbreaking new book, the author, a trans man, trains to fight in a charity match at Madison Square Garden while struggling to untangle the vexed relationship between masculinity and violence. Through his experience boxing—learning to get hit, and to hit back; wrestling with the camaraderie of the gym; confronting the betrayals and strength of his own body—McBee examines the weight of male violence, the pervasiveness of gender stereotypes, and the limitations of conventional masculinity. A wide-ranging exploration of gender in our society, Amateur is ultimately a story of hope, as McBee traces a new way forward, a new kind of masculinity, inside the ring and outside of it.  —From the author’s website

Faking It: The Lies Women Tell About Sex–And The Truths They Reveal, by Lux Alptraum

Lux Alptraum is a fearless and frequently hilarious guide through the murky waters of 21st-century sexual politics, one who never settles for the easy answers. ‘Faking It‘ shows that in sex — as in so much else — what women do matters less than why they do it. — Sady Doyle, author, Trainwreck

Through interviews with the Feminist Five and other leading Chinese activists, Hong Fincher illuminates both the challenges they face and their “joy of betraying Big Brother,” as Wei Tingting—one of the Feminist Five—wrote of the defiance she felt during her detention. Tracing the rise of a new feminist consciousness now finding expression through the #MeToo movement, and describing how the Communist regime has suppressed the history of its own feminist struggles, Betraying Big Brother is a story of how the movement against patriarchy could reconfigure China and the world. —From the author’s website

Drawing on her own experience, her research, her work with hundreds of survivors as the head of a rape crisis center in Boston, and three decades of grappling with the issue as a feminist intellectual and writer, Abdulali examines the contemporary discourse about rape and rape culture, questioning our assumptions and asking how we want to raise the next generation. She interviews survivors whose moving personal stories of hard-won strength, humor, and wisdom collectively tell the larger story of how societies may begin to heal. —The New Press

It Was Me All Along, by Andie Mitchell